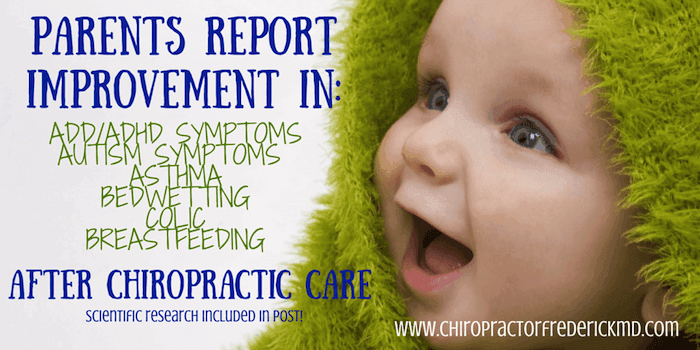 In doing research for an upcoming event, I came across a lot of information regarding childhood conditions and how a pediatric chiropractor can help.

The above image is a flyer I made to hand out to parents.  For access to the research articles, please follow the citations below.

[1]       A systematic review completed in 2011 concluded that, “given the ineffectiveness of pharmaceutical agents [in treating Autism Spectrum Disorder], a trial of chiropractic care for sufferers of autism is prudent and warranted.” Since ASD is largely a disorder of abnormal sensory processing, the chiropractic adjustment may be able to “attenuate sensorimotor integration based on [studies involving] somatosensory evoked potentials”

[3]       Chiropractic care has been shown to ameliorate “growing pains.” According to the journal of Complimentary Therapies in Clinical Practice, a trial of care (ie.3x/week for 3 weeks or 4 visits over a period of 14 weeks) resolved patient symptoms. This study claims that spinal manipulative therapy is a low-invasive, effective treatment option for children with growing pains.

[4]       In 2010, A retrospective case series looked at the treatment of children (9-13 years old) diagnosed with ADHD. “Our findings found improvement in ADHD symptoms (ie, hyperactivity, impulsivity, and inattentiveness, as well as behavioral, social, or emotional difficulties) and provide supporting evidence on the effectiveness of chiropractic in the treatment of children with ADHD.”

[5] In 2012, A systematic review showed that after 3 months of care, “children [with asthma]receiving both SMT [spinal manipulative therapy] and optimal medical management reported increased improvements in their quality of life, even at one year follow up”.

[6] The 2012 systematic review also noted two studies of chiropractic care that demonstrated improvements in enuresis, in terms of “fewer wet nights.” The authors argue that more studies should be completed, however, as the two previous studies lacked description of blinding and “safeguards against contamination or co-interventions.”

[7] The same 2012 systematic review investigated a study looking at the effects of spinal manipulative therapy and upper cervical care (both forms of manual therapy performed by chiropractors) on children with autism. 5/7 children receiving SMT and 6/7 children receiving UCC demonstrated improvements in symptoms of autism “as measured by the Autism Treatment Evaluation Checklist.” It should be noted that the children receiving upper cervical care “had higher average improvements in their ATEC score, with one child in the UCC group reportedly no longer meeting the criteria to be considered autistic.”

[8] The 2012 systematic review also investigated studies exploring the effects of SMT on infants with “suboptimal breastfeeding.” Mothers reported the weight of the baby and the baby’s ability to exclusively breastfeed (not needing bottle supplementation), and researchers found that 78% of infants responded favorably to SMT.

[5-8] Gleberzon, B., J Arts, E McManus. “The use of spinal manipulative therapy for pediatric health conditions: a systematic review of the literature.” The Journal of the Canadian Chiropractic Association. Jun 56(2)(2012):128-141.